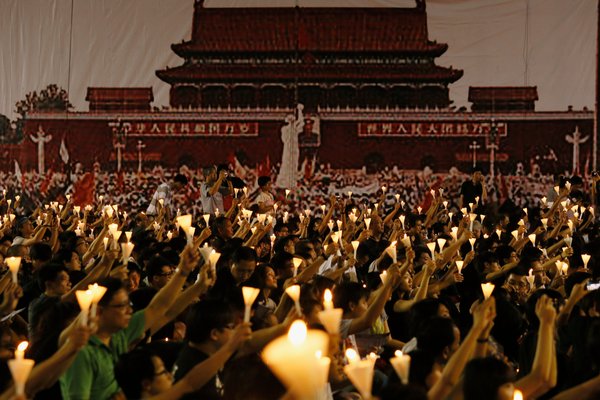 Tens of thousands of people gathered Monday in Hong Kong for a candlelight vigil on the 23rd anniversary of China’s deadly crackdown against students in Tiananmen Square.

Police detained a man in Tiananmen Square in Beijing on Monday, the 23rd anniversary of China's crackdown of democracy protests.

“I want to thank all the stock traders!” wrote one microblogger.

“Maybe God does exist?” wrote another.

Whatever the reason, the strange trick that the stock market played on the Chinese Communist Party sent the country’s censors scrambling as well, prompting them to undertake unusually strenuous efforts to block references to the tragedy, which Chinese leaders have tried desperately to erase from their country’s consciousness.

And even before tens of thousands of demonstrators clad mostly in black gathered at Victoria Park in Hong Kong for an annual candlelight vigil commemorating the Tiananmen killings, censors were also blocking searches for “Victoria Park,” “black clothes,” “silent tribute” and even “today.”

Not only did the broad index of the Shanghai exchange fall 64.89 points on Monday, but the index also opened that morning at 2346.98, a figure that, to some, looked like the date of the crackdown written backward, followed by the 23rd anniversary.

The Shanghai Stock Exchange Composite Index is calculated by adding up the market capitalizations of hundreds of stocks and then converting the sum into an index based on a value of 100 on Dec. 19, 1990. Richard W. Kershaw, the managing director for Asia forensic technology at FTI Consulting, a global financial investigations company, said that it would be almost impossible for anyone to coordinate the buying and selling of so many stocks to produce a specific result.

But hackers have targeted the computer systems at other stock exchanges in the past, and Mr. Kershaw said it was at least possible that this might have occurred in China. He predicted that the government would investigate, adding, “You can bet we’ll never hear the results.”

Chinese culture puts a very strong, sometimes superstitious, emphasis on numbers and dates. The Beijing Olympics started at 8:08 p.m. on Aug. 8, 2008, a time and date chosen for the many eights, considered an auspicious number.

The turnout on Monday, on a humid evening under a luminous full moon, was particularly hard to calculate.

Six soccer fields in front of a large stage, the core of the park, filled up with densely packed crowds earlier than in previous years. That prompted people to spill over to a series of other fields in the park. Some fields had outdoor screens that were put up to display the proceedings; others had no such provisions, having not filled with crowds in past years.

There was also an unusually large turnout of people who appeared to be in their teens or 20s. Until the last several years, the vigils had been mostly attended by people in their 40s and older — those who had experienced soaring hopes for democratization in 1989, followed by crushing disappointment.

Andy Lo, 20, a university student, said that social media like Facebook had been filled this year with calls to attend the vigil. But he and others there were unable to explain why this had happened.

“I used to think it was just a ritual,” he said. “We want something to change, the voice for change is much stronger now, but I can’t account for it.”

Even 23 years later, the use of tanks and gunfire to disperse unarmed students and other Tiananmen Square protesters remains a point of bitter dispute in China and around the world.

Increased attendance at the Hong Kong vigils has coincided with public concern here and in mainland China about issues including corruption and the inequity of wealth. And retired Chinese officials who were in office in the months leading up to the Tiananmen Square crackdown have begun publishing their memoirs.

The memoir of Zhao Ziyang, the general secretary of the Chinese Communist Party in the two years before the protest, was published shortly before the 2009 vigil. He was ousted from power immediately after the Tiananmen crackdown by Deng Xiaoping, China’s supreme leader at the time.

A series of conversations with Chen Xitong, the mayor of Beijing in 1989 and a reputed hard-liner, were published last week. He expressed regret that a military assault had taken place, denied reports that he had played a role in organizing the attack and said that “several hundred people died that day.”

Estimates of the civilian death toll in the crackdown have ranged from the hundreds to thousands.

China tightens security measures for the anniversary each year. In the last few days, the government has detained or placed under house arrest an unknown number of dissidents, part of an annual procedure before the anniversary.

The local government of Tongzhou, an eastern district of Beijing, took the unusual step of publishing on its Web site a description of its precautions for the anniversary: “From May 31 to June 4, wartime systems and protective measures should be in effect, and security volunteers, wearing red armbands and organized by the collective action of neighborhoods, should be on duty and patrolling.”

Liu Weimin, a Chinese Foreign Ministry spokesman, expressed “strong dissatisfaction” with the United States on Monday after the State Department issued a statement on Sunday calling for China to free political prisoners still in jail nearly a quarter-century after the Tiananmen crackdown.

Recent Earthquake list
Did you feel it? - Report an Earthquake